skip to main | skip to sidebar

For those of you who enjoy surveys, check out THIS ONE over at www.southerngospelblog.com. How familiar are you with other styles of music? Daniel Mount is surveying Southern Gospel fans to find out. The survey is up until 11:45 PM EST Sunday.
Posted by Keith at 6:40 AM 4 comments:

For many of my friends, Southern Gospel music is an irrelevant part of religious culture/worship. Unfortunately, they have one too many examples of why that's the case. In some groups you might find a lack of musicality, excessive showboating, or cheesy presentations. Sometimes, I'm as offended as you are. But for all you haters out there, don't base your opinion of any entire genre based on a few examples. I can do the same thing with any given style of music. For every Casting Crowns there will be 25 Family Force Five's that offend me with their pathetic presentation. But, the fact that I am majorly turned off by Family Force Five's music (to carry on my example) doesn't cause me to label all other CCM groups as poor examples of Christian music. In spite of such wannabe groups, there will always be quality bands like MercyMe, Jeremy Camp, David Crowder Band, and others who represent the genre well. The same is true in the Southern Gospel field.

Don't really have a great comment to tie this whole post together. This just happened to be on my mind.
Posted by Keith at 9:58 AM 1 comment:

What a phenomenal song! Thanks to Susie Batton for capturing this morning's rendition of "If You Knew Him".
Posted by Keith at 10:43 PM No comments:

Speaking of Cole, this past year has taken me back to Parenting 101. I honestly forgot some of the gross stuff associated with babies. You never really forget diapers and that sort of thing, but the other disgusting things they do...ah, now that's the spice of life. Like last night for instance. Cole and I were in the bedroom, the other kids in bed, and Lori downstairs somewhere. Parents have those moments when they realize their precious angel hasn't made a sound for a while. That usually means the devil got into them. I'm laying on the bed watching a little Sportscenter when it hits me that ol' Cole has been quiet as a mouse. I look over at him and he's on the floor sucking ear wax off some Q-tips he must have dug out of the wastebasket.

What a refreshing vacation

I feel like starting this up again. I've decided that I'm not going to let it control me, though. I'm just going to post when I feel like it.

Oh, and by the way, Cole is a lot bigger than the picture posted below. It's been a while. 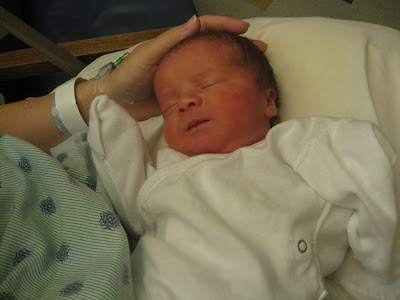 Nicholas Peyton Waggoner arrived yesterday at 9:29 AM. He weighed in at 7 lbs. 7 oz. and was 20" long. I'm pretty sure he's grown an inch since then. He has a healthy set of lungs and has all the makings of being an impressive tenor.

We're going to call him Cole (from niChOLas). I'm a proud Dad!

It's been a busy month.

Our family had an incredible Christmas and New Year. We celebrated Christmas Eve by having Pastor Dave, Julia, and the fam over. Between the Wii tournament, Rook tournament (which Dave and I won handily), and awesome food we had a wonderful time. It was around 3 AM Christmas morning when the party disbanded. All of the kids, except Katie, were asleep. Christmas morning was our time. There is no gift that compares to watching Trey and Kassady open their Christmas presents. We had already celebrated an early Christmas in November with my parents, but somehow other gifts magically showed up. The kids loved it! By the way, my gift of the year came from my esteemed in-laws Dave and Char. They shipped me 6 cans of Skyline Chili. The gift that keeps on giving.

Christmas dinner was served over at Josh and Amelia Jensen's house. WOW!!! What a spread! I ate way too much, but shed some of it during our intense game of Catchphrase. We had an absolute blast! I love spending time with good friends.

By the way, if you didn't receive our Christmas letter, it's because I didn't have your email address. We went digital this year, saving nearly $200 in postage. Here's the link to the newsletter.

In all honesty, I just bummed around during the days between Christmas and New Years. I got a little done, but not much. About the only thing I did was practice with Liberty. Our new baritone, Jordan Cragun, moved in and we spent the week before Christmas and the week before New Year's Day rehearsing our classics and learning new songs. Other than that I spent most of my time reading and playing games. Gotta love that kind of life.

On New Year's Eve we went to two parties. Yeah, that's just how we roll. I just had to keep Lori out of the bubbly. We spent 3 hours over at Bob and Margaret's house and then a couple of hours at the church party. Lots of fun. I am getting pretty old, though. By the time the New Year rolled around I was just ready to go to bed. Pathetic.

Liberty sang our first concerts with Jordan on January 4. He flat out tore it up. For those of you that have followed our ministry for a while, you're going to want to hear this guy. He's doing a great job, in spite of all the abuse that he's enduring as the baby of the group. Jordan is a wonderful addition to the quartet.

I really didn't make any major new year's resolutions for 2009. I have stopped drinking soda. I guess that's kind of major. I had a cup on Christmas Eve and one cup on New Year's Eve, but that's been it. Besides the occasional craving, I'm getting by on water and the every-once-in-a-while glass of iced tea. I'm also trying to cut back on my french fry consumption. I've had three (yes, that's right: 3) french fries in the last four weeks. Now, I'm sure my inhaling of the three onion rings at Red Robin last Thursday didn't help any, but I have to have an occasional reprieve for crying out loud!

I'm also trying to read one book a week. The requirements are that it must be a biography or something to do with theology, management, or leadership. I've already finished some great reads. I finished John Lennon: The Life

over Christmas. I couldn't put it down. It was a fascinating look at the life of a guy who for better or worse helped influence music culture. I'm trying to finish up Crazy Love: Overwhelmed by a Relentless God

by Francis Chan and Crucial Conversations: Tools for Talking When Stakes are High

a classic recommended by Josh Jensen. This is for anyone who tends to avoid any type of confrontation, even if the necessary conversation could potentially enhance productivity or teamwork. I'm already benefiting from these pages. Other recent reads include Family Man: The Biography of Dr. James Dobson

. I've been missing my cable like crazy, especially during bowl season, but there's no doubt that I wouldn't be reading as much if I had it. So, it's all good. I just don't know what will happen during March Madness...

Speaking of the bowls, go Florida and Tebow (I'm doing the Gator chomp right now in celebration). Man, I'm glad they won the championship. Tim Tebow is a class guy and one of the few marquee players to come back to school for his senior year.

The Big Ten, as is becoming the custom in football and basketball, failed to show up. It's tough being a fan. Especially an IU fan through this basketball season. I do think Crean is the man for the job, though. Just give him time.

Trey started Upwards basketball last week. I'm proud of that boy. He loves sports! And, he's willing to work to get better. We've been working on his triple threat stance and controlling the ball. He's already a good shooter, but definitely needs to work on his dribbling. I just sit on the sidelines and grin like the Cheshire Cat. He's the man.

It's hard to believe, but we're less than a month from the new Waggoner boy making his grand entrance. The due date is Feb. 12. Since he'll be a C-section baby I think the date is fairly certain unless, of course, he decides to come earlier. Lori was just saying last night that this has been the easiest pregnancy yet. I just hope she didn't jinx the last month. We still have yet to pick out a name. I figure I'll have the final say, since Lori will be out of it when they ask. At least, that's what happened last time. So, I'm getting creative.

Liberty just got back from California. It was a somewhat-balmy 65 degrees on Friday, a little cooler on Saturday and Sunday. It hit me this past weekend how blessed I am to have friends scattered across the entire country. One thing that I'm trying to do more is intentionally invest in those friendships, deepening the relationships. So many of my good friends showed up to our concerts this weekend. We had a great time! God's been so good to me.

I did get some awful news on Saturday night about the Bigger family tragedy. While I didn't know Brent more than the casual friendship we developed while he was traveling for Hobe Sound and I was traveling for GBS, the news devastated me. Our prayers have been with Brent and his extended family.

Frankfort (city motto: we need to hire a press agency)

But, it's always good to see my hometown Frankfort, IN in the news.
Posted by Keith at 9:35 AM 1 comment:

I found this over at Burke's Brainwork and just had to share. Enjoy Dennis Murphy's (drummer for Kingdom Heirs) rendition of Grandma Got Run Over By a Raindeer.
Posted by Keith at 8:49 AM 4 comments:

By the way, I just noticed that I went over 1000 posts for keithinside. Thanks for reading.
Posted by Keith at 8:45 AM 3 comments: